Nutrient Requirements of the Koala 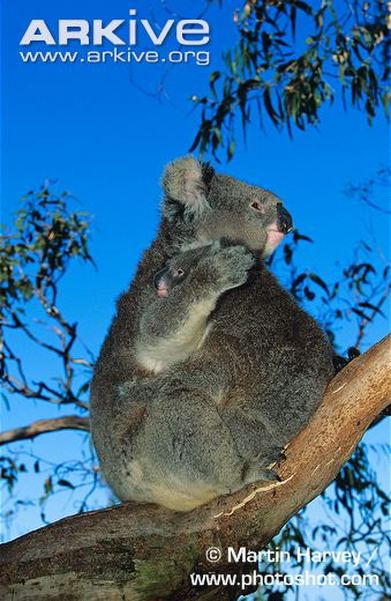 When fed Eucalyptus punctata, the  daily nitrogen requirements of the adult, non-reproductive koala is 283 mg/kg^0.75. These low requirements are explained in Hume (1999) as being due to the fact that there is low nitrogen loss in koala urine. In fact, the ratio of urea-nitrogen to total nitrogen is 0.36, so urea recycling is occurring at a high rate compared to other marsupials of similar size. As well, a little more urea is recycled in the winter than in the winter or spring. The nutritional content of E. punctata is 6.9-9.2% crude protein (Hume, 1999). However, the loss of nitrogen to feces in the koala is high due to protein-tannin complexes, thus eucalyptus has expensive fecal nitrogen loss at a rate of 83% (Hume, 1999).

The water turnover rate of the koala is quite low at 80 mL/kg^0.8 in the winter and 92 mL/kg^0.8 in the summer, which is about 75% of the predicted level for a eutherian (Hume, 1999). Koalas are not able to concentrate liquid very effectively in the kidneys, which offers explanation for why koalas may choose foliage with little water content (Hume, 1999).  However, since koalas perform evaporative cooling especially in the summer months, they are expected to select leaves with higher water content during this time (Hume, 1999).

Since there is low ash content in eucalyptus, it suggests it has a low mineral status. However there are few accounts of mineral deficiencies in koalas, thus it is likely to have a low mineral requirement. Eucalyptus also contains concentrations of phosphorous, sodium, selenium, zinc and copper (Hume, 1999).

Energy Requirements of the Koala

Koalas do not obtain many calories from their diet, and require a low amount as a mostly sedentary animal sleeping 20 hours per day. The koala performs an average of five feeding session, during which it consumes roughly 400 grams of leaves throughout the day.

Most of the koala's digestion, 91% in fact of their daily energy requirement, is performed in the small intestine, to which nutrient availability is dependent on the efficiency of the mastication and rather small stomach.  As a koala’s teeth are worn down over time and age, they increase their food intake and feeding time as a counter to the potential loss of nutrients since the teeth will be less effective in their cutting and shearing abilities. In fact, studies show that koalas with high tooth wear have much smaller home ranges, since they move between trees less. Logan and Sanson (2002) who performed this research, extrapolate that with age (and tooth wear), koala’s dedicate their energy to procuring fresh leaves and feeding, and less with establishing territory and social status.

The tannin-protein-complex-degrading enterobacteria (T-PCDE) produces tanners which, according to Osawa et al. (1993), hydrolyzes gallic acid esters such as gallotannin and tannic acid. It has been demonstrated that without T-PCDE, koalas are susceptible to malnutrition because they will no longer be able to utilize protein-bound tannins.

The final product of fermentation is a rather low concentration short chain fatty acids
(comparatively to other hindgut fermenters of similar size), which is due to a slow process of fermentation (Cork and Hume, 1983). Since the digestion of cellulose and hemicellulose is quite low, and the production of short chain fatty acids accounts for just 9% of energy absorbed, then it is the digestion of crude proteins, sugars, starches, some lipids from the inner plant cell that make up the majority of energy used by koalas at 80% (Hume, 1999).

Finally, the koala has one of the longest times for hindgut retention, at 213 hours for solutes and about 100 hours for particles (Hume, 1999).

KrockenbergerKrockenbergerThe following values are obtained using values from Hume (1999)’s tome on Marsupial Nutrition. Traditionally, the BMR of the marsupial is roughly 30% lower than the eutherian mammal, thus the “average marsupial”’s BMR is roughly 49 kcal, or 204 kj kg^-0.75d^-1 or 2.33 W kg^-0.75. Krockenberger (2003) suggests that the BMR for a lactating koala is not much different from a non-lactating koala, at a rate of 1778 kJ.day(-1) for a 6.25-kg female. However, as an arboreal folivore, the koala has one of the lowest BMRs at 52% of the rate expected from mass in eutherians.  While the koala is not featured on the table of BMRs for marsupials, a Phalangeriforme, such as the possum, is a sister suborder of the Vombatiformes (koalas) has the following Basal Metabolic values, which can be potentially extrapolated to that of the koala. The Daily Energy Expenditure (DEE) is known as the energy cost of free existence, also called the Field Metabolic Rate (FMR). Th FMR:BMR ratio is lowest in the koala and a few other arboreal folivores at a level of 1.7. 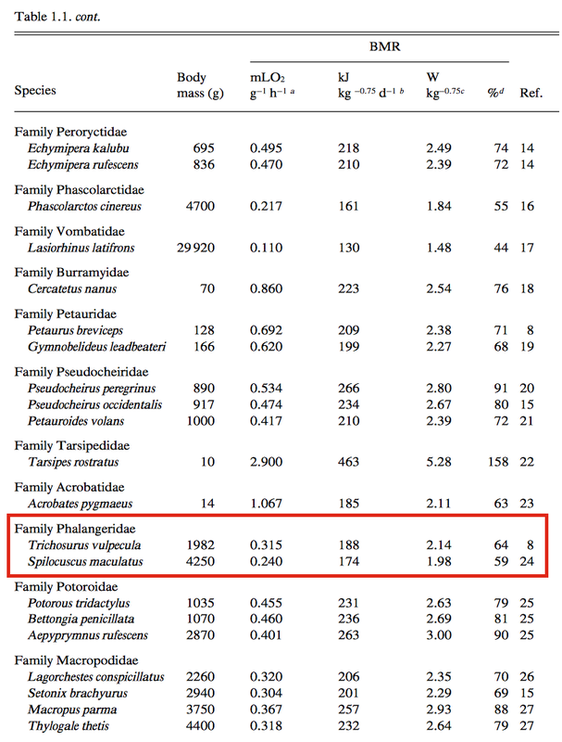 Energy and Nutrients during Reproduction

Since there is low-nutirtional quality in the koala’s diet relative to other marsupials and especially other mammals, reproduction creates additional energetic requirements and may become quite a taxing situation for the koala. Hume (1999) describes a study where female koalas in New South Wales lactated for nine-months, more than half as long as a typical mammal of similar size. This was an energetic strategy to meet energy demands and maintain the same metabolic rate of a non-lactating female.

Another way to meet energy demands is to keep the lipid content of koala milk the same even once the joey has left the mother’s pouch (Hume, 1999).

Female koalas also increase their food intake and digestive tract capacity by almost 30% when lactating, while reducing their home range by half so less energy is spent moving between trees. Finally, the lactating koala reduces the ratio of surface area to mass by 10% when it carries its joey on its belly or back, ultimately allowing it to save 108 kJ per day (Hume, 1999). These are the strategies of the lactating koala to balance its energetics when adapted to a low-nutrient diet.
References:
Powered by