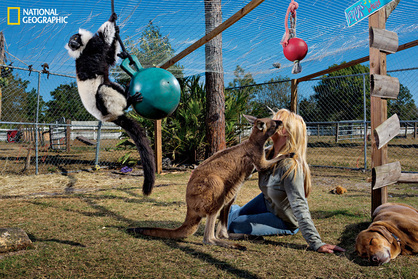 Earlier I discussed the history of zoological institutions as having emerged from the menageries of past centuries.  However, zoos today have largely dissolved the aristocratic and elitist nature of private, exotic collections.  According to the World Association of Zoos and Aquariums (WAZA), over 700 million people each year visit zoos worldwide.25 Still, the core values of menageries, to generate conversation, curiosity, and reverence for the unknown living wonders of the world, are the same pillars I believe that the most commended zoos found themselves on today.

Public zoos and institutions provide the opportunity to foster a sense of respect and stewardship in visitors hailing from metropolises or the rural countryside, those who would likely never have the chance to see a giant panda or axolotl in person, let alone understand the importance of their conservation. The educational nature that is inherent in a proper zoo combats apathy, and for this reason zoos are an invaluable part of modern society.  However, many zoos are accused of prioritizing the public and their staff before the welfare of their animals.  Established institutions, such as Marine Land and the African Lion Safari in Ontario, are scrutinized for failing to maintain an appropriate standard of care for their inhabitants. Slandered and maligned in popular news journals, these zoos are deemed guilty of operating on a business front, and sidelining education and conservation because it drains, rather than supplements, their profit. The field of Ecotourism has become a buzzword in common parlance today. Fennell (2013) explored how zoos largely place the public interest over that of the animals, and until this order of priority is flipped, it is unsuitable as a sight of ecotourism, which would see the welfare of the animal prioritized.14

If there is any zoo in Canada, which comes closest to allying itself with the ecotourism attitude, it is the globally acclaimed Toronto Zoo.  This forty-year old institution hosts over five thousand animals and a budget of $51 million, with a revenue of $40 million.13 Of that budget, roughly 70% goes to the administration, operations, marketing, and general management, while approximately 30% goes to conservation, education, and wildlife, at a $15.2 million dollar expenditure, with $136,000 to animal and endangered species services.17 According to the official purpose of zoo conservation and science, the zoo hopes to “[preserve] endangered plant and animal species...[perform the] stewardship role of the human species….[and] provide compelling education and outreach experiences”13 This service looks to provide lectures, camps, workshops, and volunteer outreach.  Whether or not this amount of attention is sufficient, as its budget allotment seems a tertiary priority, the current budget report states that Conservation Services has increased in funding while management and administration fees have seen a decrease.  This indicates the zoo is aware that this particular service requires a higher level of consideration, and rightly so.

The Toronto Zoo is an accredited member of the Canadian Accredited Zoos Association (CAZA), which considers itself the, “benchmark for quality animal care and welfare…[and that] governments at all levels are incorporating [their standards] into legislation.”17 In terms of enforcement and maintenance of their standards, the CAZA mobilized inspection teams, comprised of a veterinarian and a senior-level zoology professional, to audit the zoo every 5 years consistently and transparently, in accordance with Association of Zoos and Aquariums Accreditation standards.   According to the CAZA Accreditation Standards of 201218, the education, research, conservation, public safety, security, financial stability, administration, nutrition, and care of the animals are all subject to inspection.  As an institution, the Toronto Zoo falls under the scrutiny of the International Air and Transport Association, Canadian Food Inspection, Department of Fisheries and Oceans, the Veterinarian’s Act, and finally, the standards, code of ethics, and policies of the CAZA.

In revisiting the prospect of ecotourism as a venture which works in the best interest of the natural world, and the interests of those who interact and impact, I would argue that adopting aspects of the ecotourism model would make for a zoo which places the interests of its animals over the public.  This is emphasized in Fennell’s article, which states, to “embrace as ecotourism interactions that place the interests of animals over the interests of humans. This would include encounters with free-living animals that would have the liberty to engage or terminate interactions independent of human influence.”14 As well, Fennell states that one of the largest issues that prevent zoos from engaging in the ecotourism ethos is that they tend to involve themselves mostly with in situ inhabitants, and neglect to support the conservation and protection of those conspecifics living ex situ in their natural habitat. The Toronto Zoo, along this respect, is an active member of the International Union for the Conservation of Nature (IUCN), and involved in 40 Species Survival Plans, helping to re-introduce, through captive breeding programs, critically endangered species such the Black-Footed Ferret.  As well, the Toronto Zoo implemented its Green Plan in 2007, which looked to sustainably manage waste, water, and energy, while also running educational programs of the same interest. They follow closely the mandate of the AZA, in the interest of developing the best practices and welfare standards.

Association of Zoos and Aquariums The Association of Zoos and Aquariums (AZA) has been generating, since 2005, Animal Care Manuals, which contain all the knowledge of various species’ care and management, as derived from experts and research, with the goal of “maximize[ing] capacity for excellence in animal care and welfare.”19 The AZA Animal Welfare Committee develops these manuals, and they go through continuous review periods before being completed, at which time they are required to be used by all accredited institutions.  Currently there are just over 20 manuals completed, such as those for tigers and chimpanzees, and there are at least 150 drafts going through the review process currently. The goal of the AZA is to “facilitate the development of consistent animal care practices across taxa for the wide variety of species regularly held in zoos and aquaria.”20 However, as Appleby states in his book Animal Welfare, “similarly to the situation for farm animal assessment, the [manuals] can only provide very general resource-based and management-based welfare guidelines that…set the stage for good welfare, but naturally cannot provide and assessment of the actual welfare experienced by individual animals.”20 Appleby recognizes that the AZA accreditation standards and the care manuals are resource-based measures, as opposed to outcome-based measures, and “ideally, [these] need to be linked with indicators or measures of welfare obtained on individual animals and specific outcomes to ensure that care recommendations are truly effective at the individual animal level.” 20 Thus, while the current AZA care manuals are well researched and thorough, they could stand to include a larger consideration of how to assess welfare and ensure the animal’s behavioural needs are met.

Current Legislation and Regulation According to the Canadian Constitution Act10, “animals are property”, and the jurisdiction over exotic animals proceeds primarily at a provincial level across the nation.  Diana Marsillio-Apostoli21 who is the manager of Animal Welfare and Operations at the Ontario SPCA Provincial Office notes that before acquiring an exotic pet one should, “check the requirements with their local municipality to determine if that particular species is permitted.  Certain animals, such as a Cayman, are not permitted for private ownership under Federal legislation.”  In Alberta and PEI, “dangerous” exotics are banned, including primates, while other provinces provide specific lists of animals that require additional permits.  British Columbia is a leader in exotic animal regulations, having installed permits specific to the type of exotic ownership to “[control] the possession, breeding, shipping and releasing of alien animals (i.e. that are not native to B.C.) posing a risk to the health or safety of people or the environment.”12 However, there is currently neither law nor legislation in the province of Ontario, which restricts the private ownership of exotic animals.  The legislation regarding exotic animals functions instead at a municipal level, but it tends to be inconsistent across regions. The progress towards shifting the regulations, or lack thereof, governing exotic pet ownership to a provincial level is unfortunately slow. The Exotic Wildlife in Captivity Act of 2010 addresses this issue, but has yet to have been passed.  The act defines exotic wildlife as, “an animal of a species or type, other than game wildlife or specially protected wildlife, that is not native to Ontario and that in its natural habitat is usually found wild by nature and includes a species prescribed by the regulations.”  The act addresses the private ownership of animals, outlining that no person is to possess exotic wildlife, “except under the authority of a license and in accordance with the regulations” such that it will not escape, hunt or propagate.9

Devoid of provincial legislation, Ontario instead has doled out the responsibility on a municipal level. Municipalities have the power to enact a firm stance on the issue due to the Ontario Municipal Act of 2003. As well, any animals which are cited in the Control List of the Canadian Wildlife Service of Environment Canada, or provincially prohibited are not allowed, nor is the transportation or sale of such species.8 As enforcement, the Ontario Society for the Prevention of Cruelty to Animals (OSPCA) is the sole authority involved in animal cruelty investigations.  However, for institutions such as the Toronto Zoo, which is Canadian Council of Animal Care (CCAC) represented, the OSPCA cannot necessarily inspect without permission, as the ministry of agriculture and the Canadian Association of Zoos and Aquariums already perform inspections of the zoo. The OSPCA is an animal welfare organization, and subscribes to the definition of welfare put fourth by the Canadian Veterinary Medical Association, such that it is a “human responsibility that encompasses all aspects of animal wellbeing, including proper housing, management, nutrition, disease prevention, responsible care, humane handling, and, where necessary, humane euthanasia.”21 Diana Marsillio-Apostoli21 states that, “[human-animal] interaction should include provisions for the proper care and humane management of all ani­mals involved.”21

Having considered the excellent standard of animal care in public institutions such as the Toronto Zoo, for homegrown exotic pet enthusiasts the information available online and in pet stores is either more bountiful in quantity rather than quality, or does not exist for many species. Entering how to care for [insert exotic species] on an Internet search-engine will more often than not provide a long list of secondary sources consisting of misinformation, inexpert advice, and unsubstantiated claims before it links to peer-reviewed, published animal care manuals, if they are even available for that species. Responsible ownership entails educating oneself in the nature and needs of the animal, and ensuring that the routine care performed is based in objective, scientifically validated ideas as opposed to a smattering of varying opinions extracted from unaccredited websites and laypersons.  Privately owned exotics should be held to the same standard of care and welfare that renowned institutions, such as the Toronto Zoo, are held to.  The way to ensure that private possession in Ontario receives this level of care is to enact new regulations, which would consider the human and animal safety risk presented by certain exotics, whether it is the level of sentience, risk of danger, or other unique behavioural needs.  The new regulations would impose a graduated licensing system of for exotics, coupled with mandatory educational modules and/or training sessions to ensure responsible and knowledgeable ownership, and discourage those who look to acquire exotics on a whim, or without serious consideration.   The proposed regulation, therefore, would upturn the current paradigm of animal ownership, that of self-interest over animal-interest, while allowing those potential-owners who have demonstrated that they can shoulder the liability of providing the appropriate level of care to their exotic companion.